The southern Spanish city Seville has inspired travellers for centuries. The beauty and charm of Seville is a blend of flamenco culture, traditions, history, festivals and south Spanish lifestyle. The legacy of Moorish and Christian architecture, the myths of Carmen and Don Juan, flamenco music, its incomparable fiestas, the brilliant sunshine and magic light and its inhabitants that really know how to enjoy life.

Seville is absolutely one of the most beautiful cities in the world. The old Jewish quarter, Santa Cruz, is really unique. The narrow streets and flowered courtyards, the scent of jasmine and orange blossom in spring, the many typical Andalusian style squares and colourful flowers on the balconies and the magic light in the south of Spain make Seville a unique city. 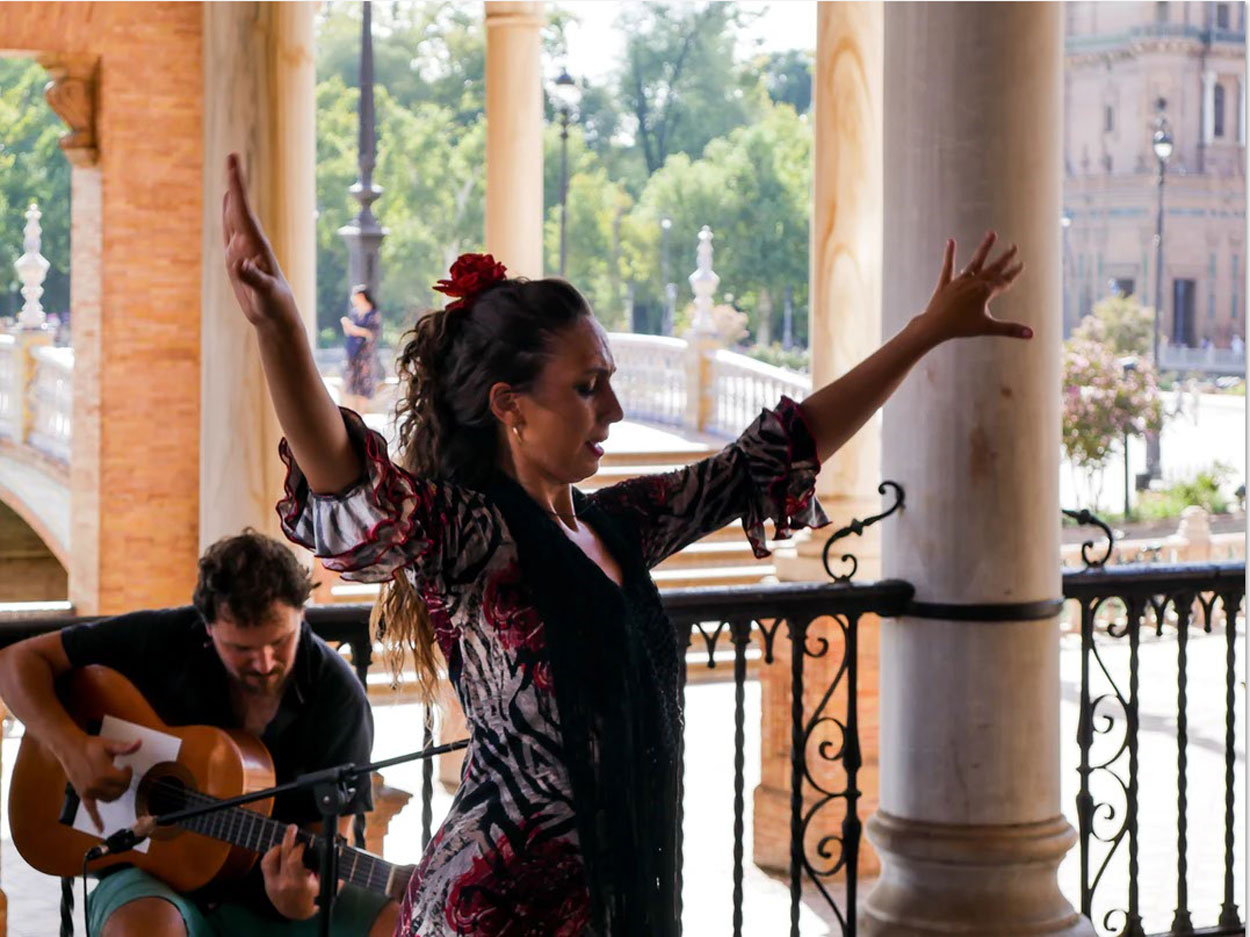 In Seville, the highlights are festivals, flamenco and tapas bars

When you visit Seville, you immediately notice that the people are different from other places in Spain. They are somehow more Spanish! Seville is one of the best cities in Spain to enjoy delicious Spanish tapas and wine or beer at the many typical Tapas Bars in the city. The Santa Cruz quarter is to be mentioned when looking for tapas, wine and fun in Seville.

There always seems to be something going on in Seville: The people in the city love to party, and there are many celebrations and festivals throughout the year. The two most important events are Easter, Semana Santa, and The April Fair, Feria de Sevilla – Feria de Abril.

Easter or Holy Week is celebrated with beautiful processions day and night. The religious Easter celebrations in Seville are considered the very best in Spain, and the city is crowded.

La Feria de Sevilla, Feria de Abril, is the biggest Spanish celebration you ever will find. During the fair, the festivities are day and night. Women and men dress up in colourful flamenco costumes. There is flamenco music, horses, horse carriages, lights, flamenco dancing, wine and food, bullfights and an enormous temporary amusement park. That is LA FERIA DE SEVILLA! Most of the fairs and fiestas in the province take place from April to October. Many flamenco Festivals are also held, mainly in the summer, while February is the time for carnivals. 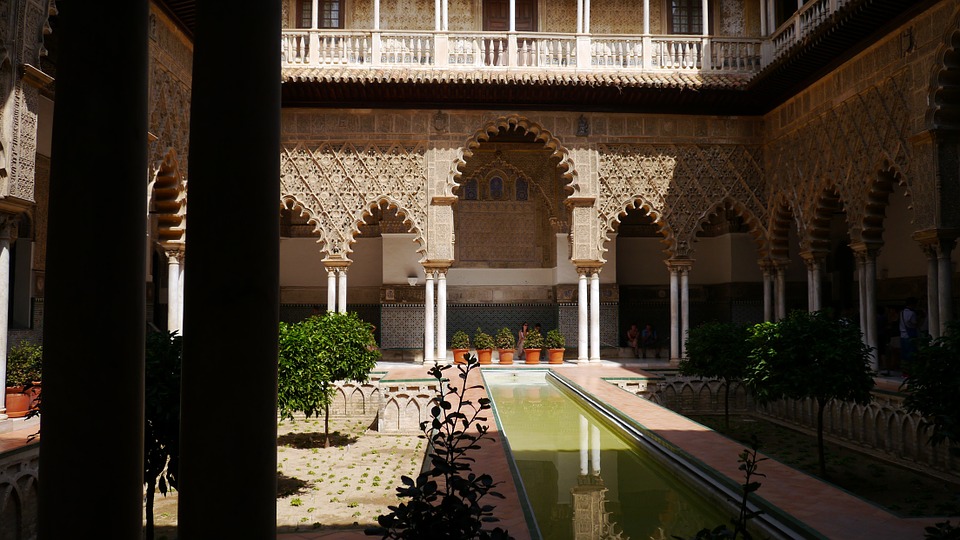 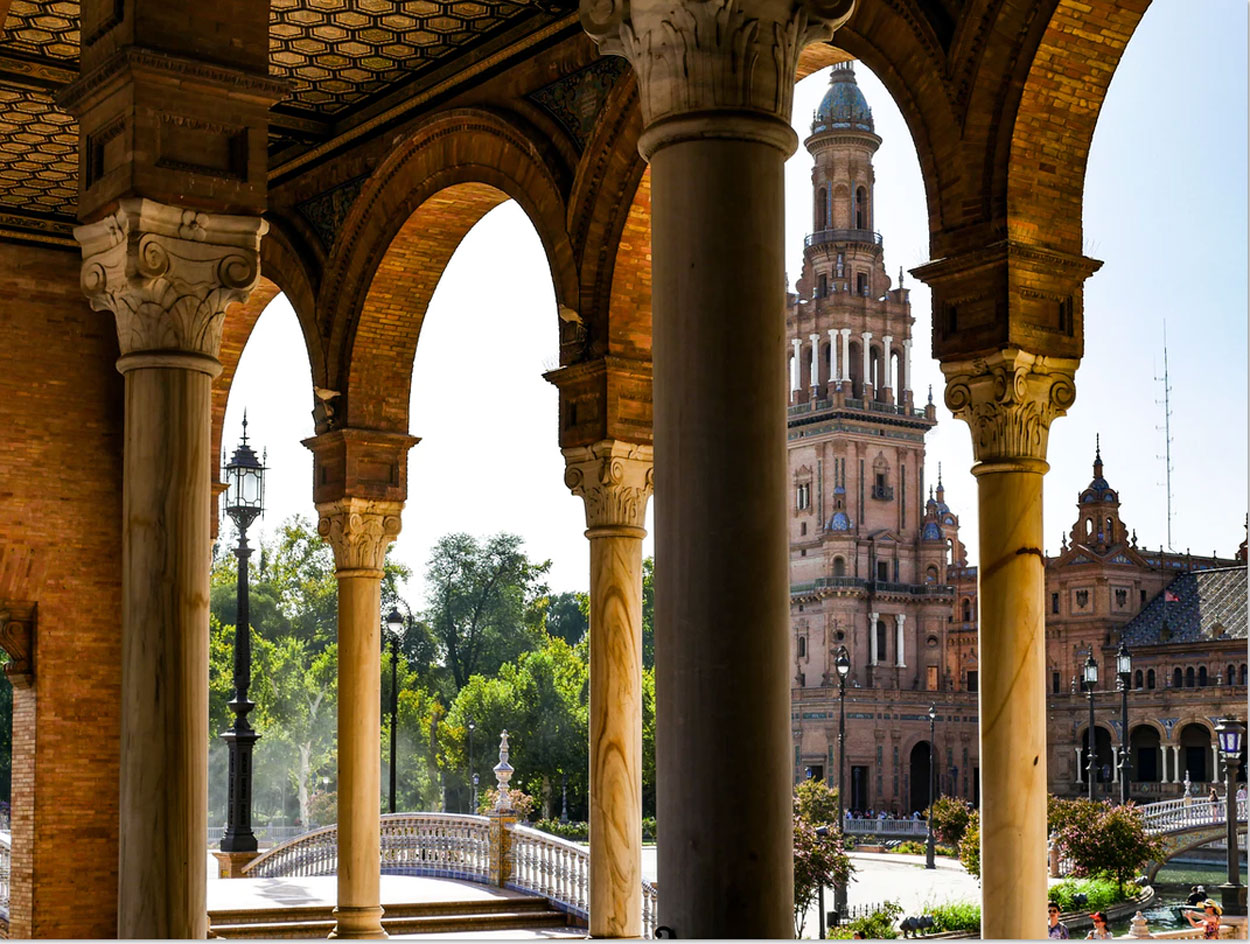 Casa de Piltos is one of the finest palaces in Seville. It was built by The First Marquis of Tarifa in the late 1400s to resemble the residence of Pontius Pilate in Jerusalem. The palace is owned now by the Duke of Medinaceli. It is the most beautiful private residence in Seville, and it is luckily open to the public. Here you can see beautiful Roman busts, an interesting fusion of Renaissance and Mudejar architectural styles and a collection of family paintings, including the ones of Barbera de Braganza who once lived there. 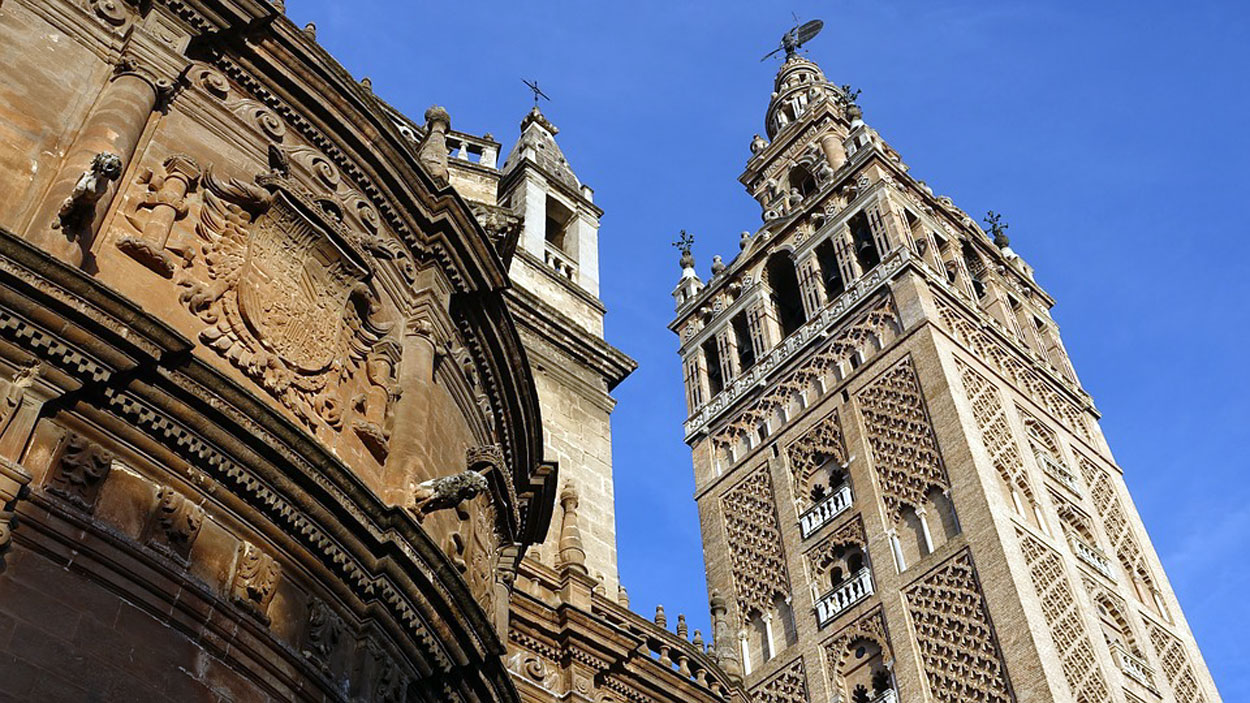 The tower La Giralda is a landmark in Seville. There are many interesting cultural visits and walking tours around the City of Seville. The Giralda is the bell tower of the Cathedral. It was once the tallest tower in the world with its 97.5 m and is one of the most famous images of the city and Andalusia. 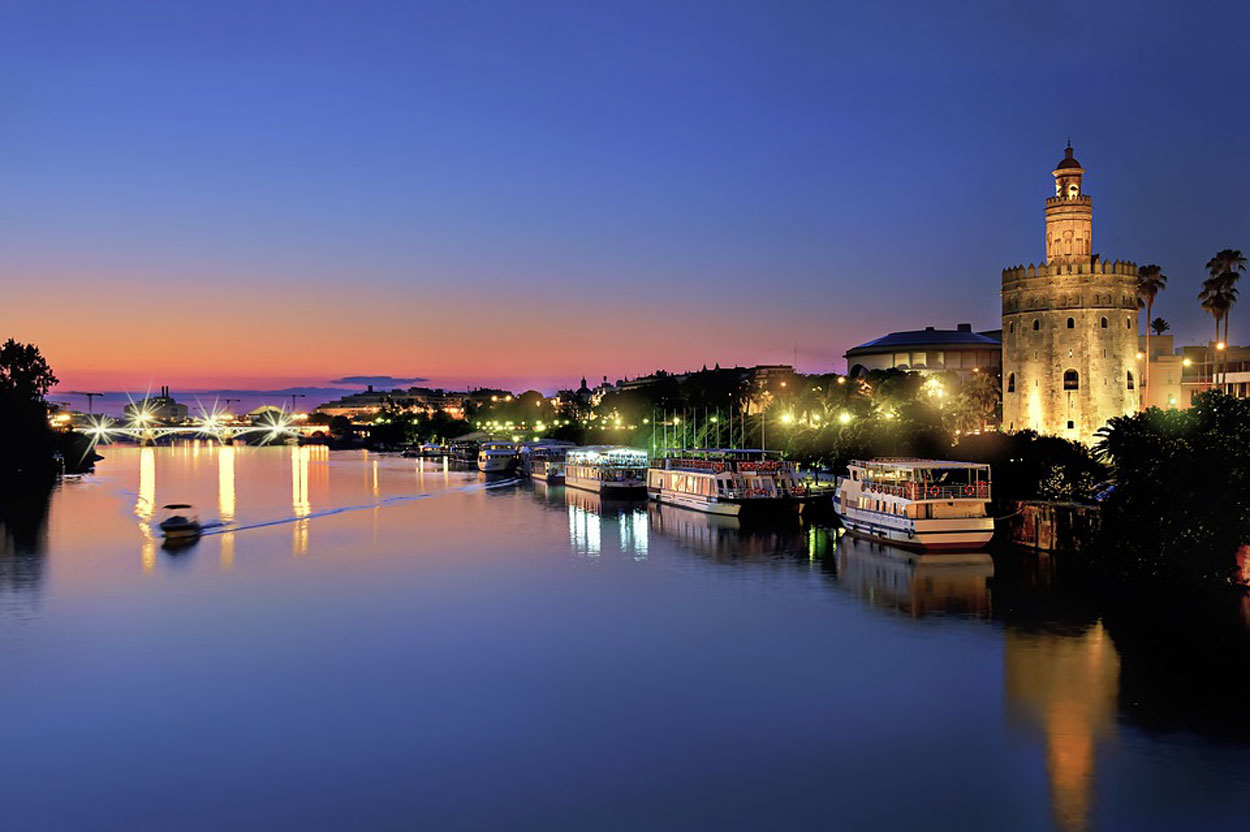 The Guadalquivir river, Puente de Triana and the most emblematic neighbourhood; Triana

The Isabel II bridge, popularly known as the Triana bridge, connects the city centre with the Triana neighbourhood, crossing the Guadalquivir River. In the 19th century, it replaced an old boat bridge that existed in the same place, making it the oldest iron bridge still preserved in Spain. Its construction was completed in 1852, during the reign of Isabel II, which is why it bears this name. 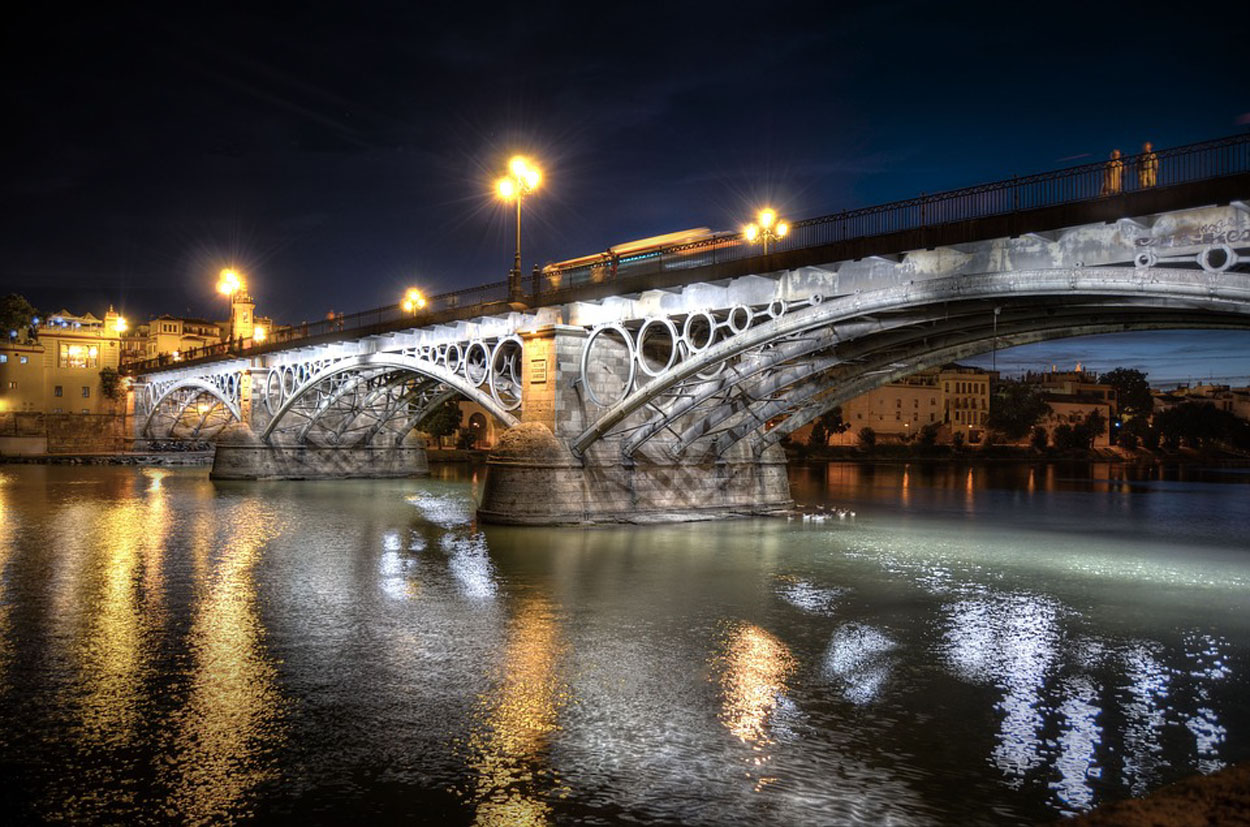 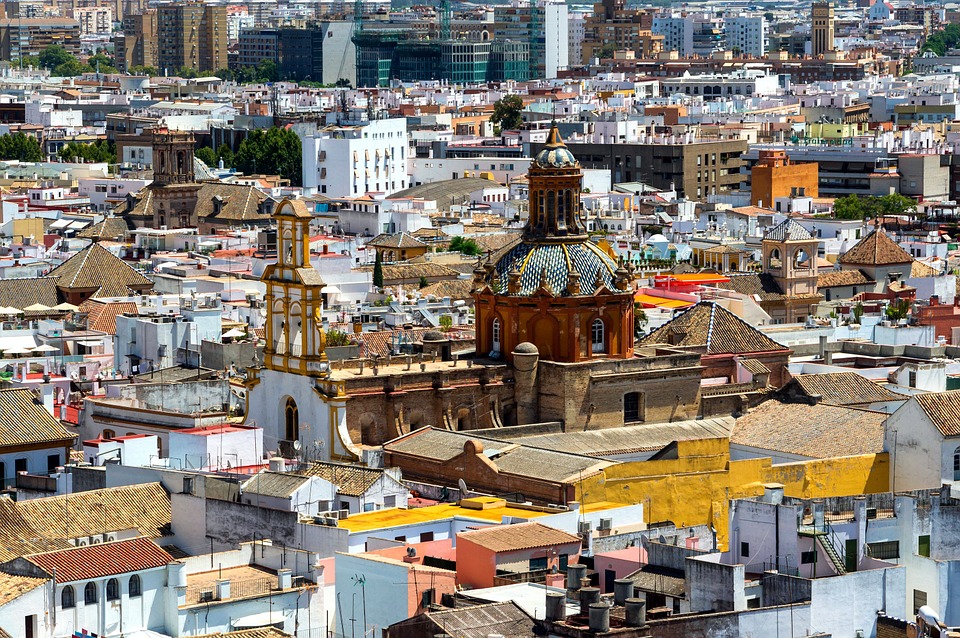 Seville is a bustling and big city full of rich history and many places to visit. The must-sees in Seville are really very hard to count. Historic Buildings, typical Andalusian Quarters, Catholic Monasteries and fascinating picturesque south Spanish streets are waiting to be discovered by first-time visitors to Seville. And then to be visited again and again by those that already discovered the enchant of Seville. Seville is a beautiful city, full of life and enchantment or as the Spaniards say: Embrujo!

QUARTIERS BENAHAVIS AND NEARBY CITIES