Skip to content
Places to visit on Costa del Sol

There are lots of places to see and visit on the Costa del Sol. Some of them are famous, others are less well-known. But many of them are well worth to keep in mind when you want to take a break from the pool and the beach.

A museum, a cave, a stupa, two castles and a visit to the monumental city of Ronda 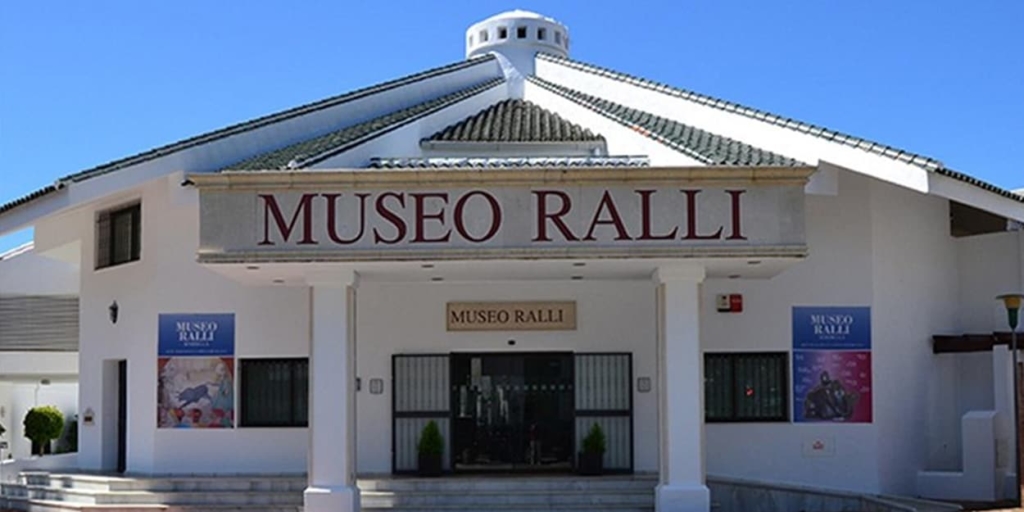 The Ralli Museum in Marbella opened in the year 2000. In the ten different exhibition halls, you can see Latin American and European contemporary art, mostly surrealism. The museum is located just a short drive from Quartiers Marbella Apartments, on the Golden Mile in Marbella. You can admire works by artists such as Carmen Aldunate, (Chile), Braun Vega,(Peru), Alicia Carletti, (Argentina) and Eduardo Sarlos, (Uruguay), among others, as well as famous European artists like Miro. The Ralli Museum houses an important collection of sculptures by Dali, Mario Aguirre and Gerardo Quiroz.

The entrance to the museum is free. The Ralli Museums belong to Harry Recanati Foundation, an organization dedicated to the promotion of the work of Latin American artists. 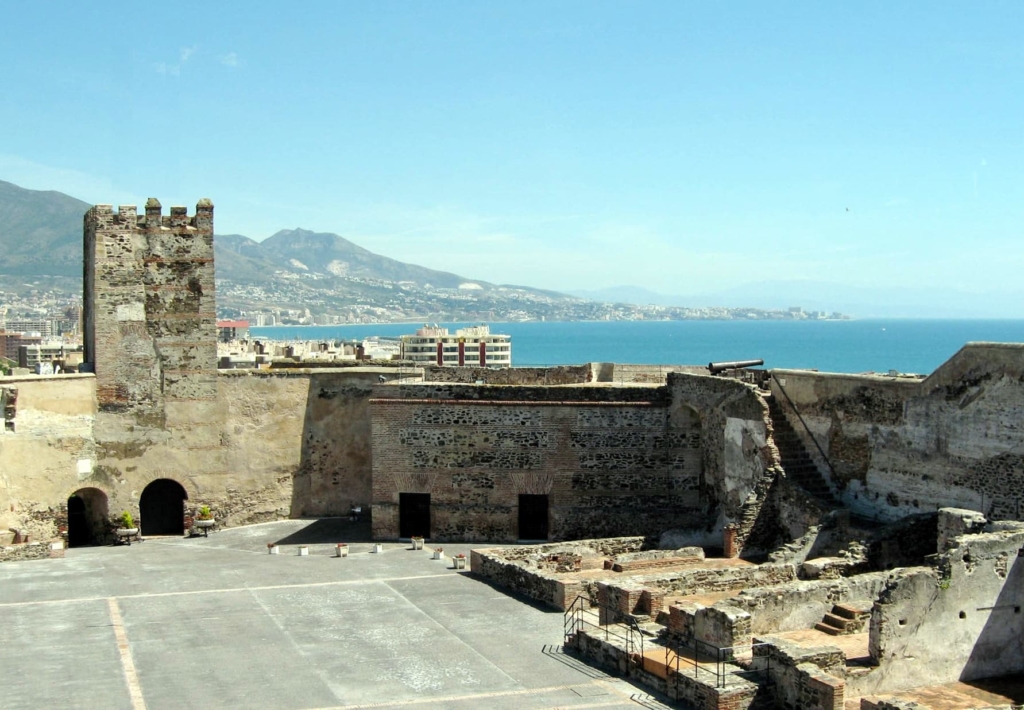 The Sohail Castle is a must-visit if you spend a day in Fuengirola. The fortress was built under the command of Caliph Abderramán III in 956, on the remains of an ancient Roman settlement on top of a small hill, near the Fuengirola river.

The castle was destroyed during the Christian conquest in 1487. Later, during the eighteenth century, it was rebuilt to fight the intense smuggling that took place in the coastal area.

Today, the castle is an open-air auditorium, where concerts and events are held, especially in the summer. The most important music event is the summer Festival Ciudad de Fuengirola. 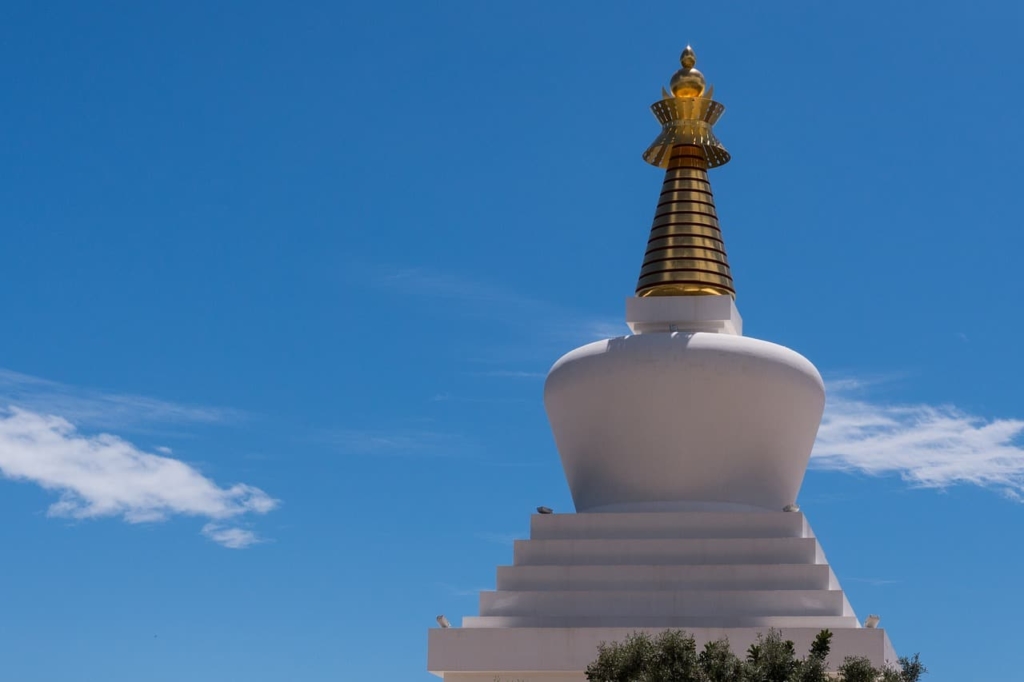 The Enlightenment Stupa in Benalmadena, Estupa de la Iluminación, is a Tibetan Buddhist stupa on the slope of Sierra de Mijas. It is 33 meters high, the largest stupa in the west. The location also offers a wonderful view of the Costa del Sol.

The design of the stupa responds to one of the eight classes of Tibetan stupas, the one that symbolizes the enlightenment of  Buddha. The Stupa of Enlightenment represents peace, prosperity and harmony while serving as a place of Buddhist meditation and shelter for reliquaries.

Stupas are generally closed monuments, however, the Enlightenment stupa has a 100 m² meditation hall and a basement, which houses exhibitions on Tibetan Buddhism and Himalayan culture. The walls of the meditation hall are decorated with the life story of the Sakyamuni Buddha. 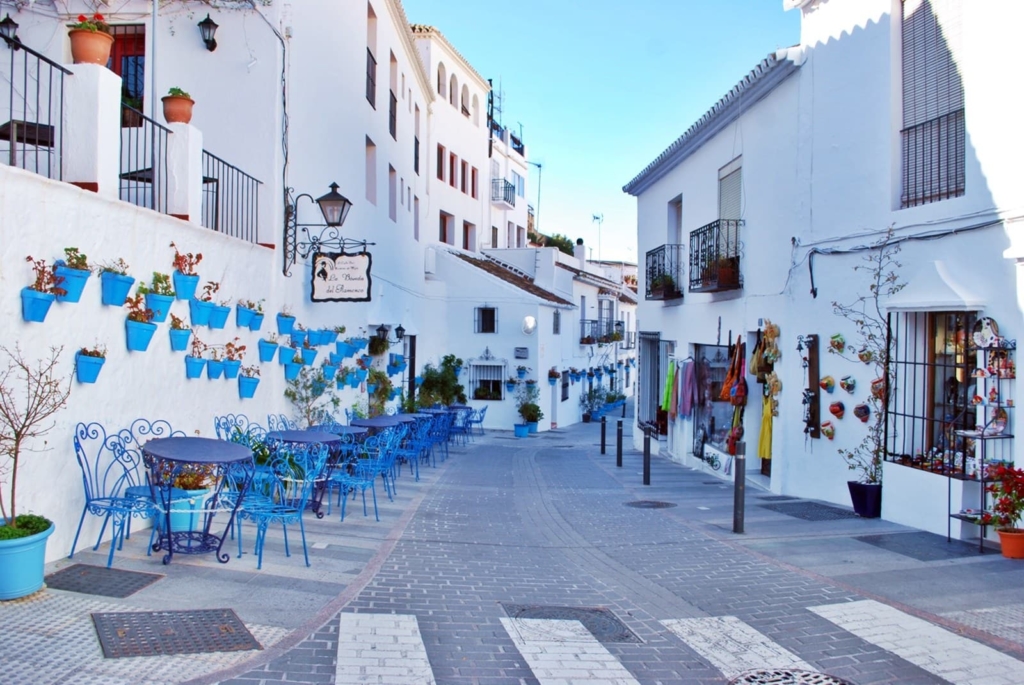 AN EXCURSION TO MIJAS PUEBLO

Mijas is known to be one of the most picturesque of the famous white villages or “Pueblos Blancos” in Andalusia. Mijas is the ideal place to visit if you want to walk on narrow streets, take postcard-like pictures and spend a day away from the beach. Mijas is also famous for having ”donkey taxis”. A tourist attraction that some people love and others hate. Animal rights campaigners are calling for an end to the service, appealing to animal cruelty.

Mijas Pueblo is located on the mountain slope, 430 meters above the sea level. It offers the visitor impressive views of the mountain, Sierra de Mijas, and a spectacular panoramic view of the Mediterranean coast.

Mijas is currently the third municipality in the province of Malaga, in terms of population. It has almost 80,000 inhabitants distributed among Mijas Pueblo, where the historic centre is located, Mijas Costa, which connects to the city of Fuengirola; and the coastal area of ​​La Cala de Mijas. 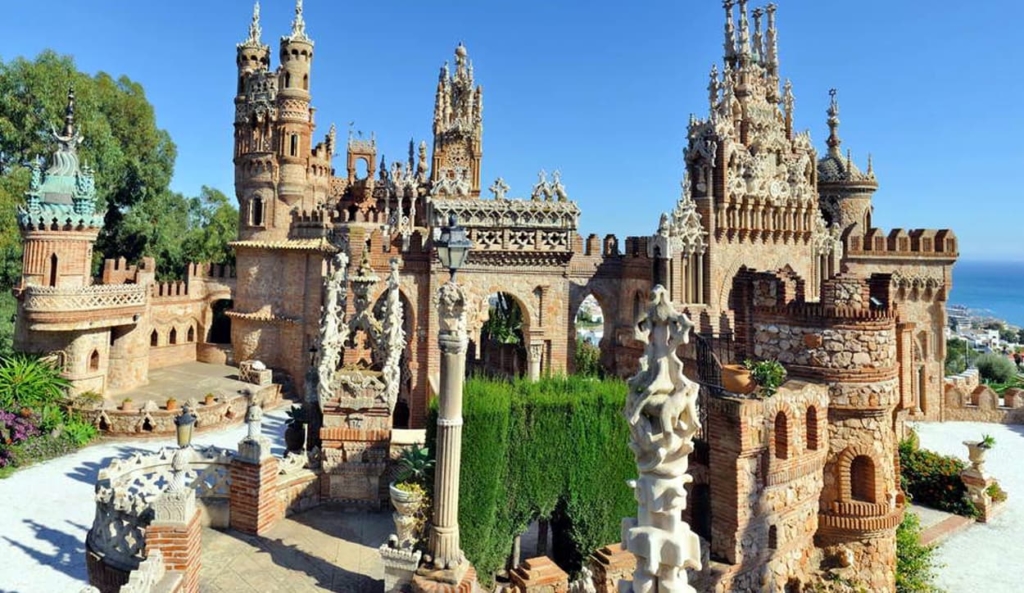 The Castle of Colomares is located in Benalmádena. The edifice was built between 1987 and 1994 by Esteban Martín, as a tribute to Christopher Columbus and the Discovery of America. It is a private building, a monument with mixed influences from different architectural styles that represent the three cultures in medieval Spain. The views are very nice, and the place is perfect to take pictures. 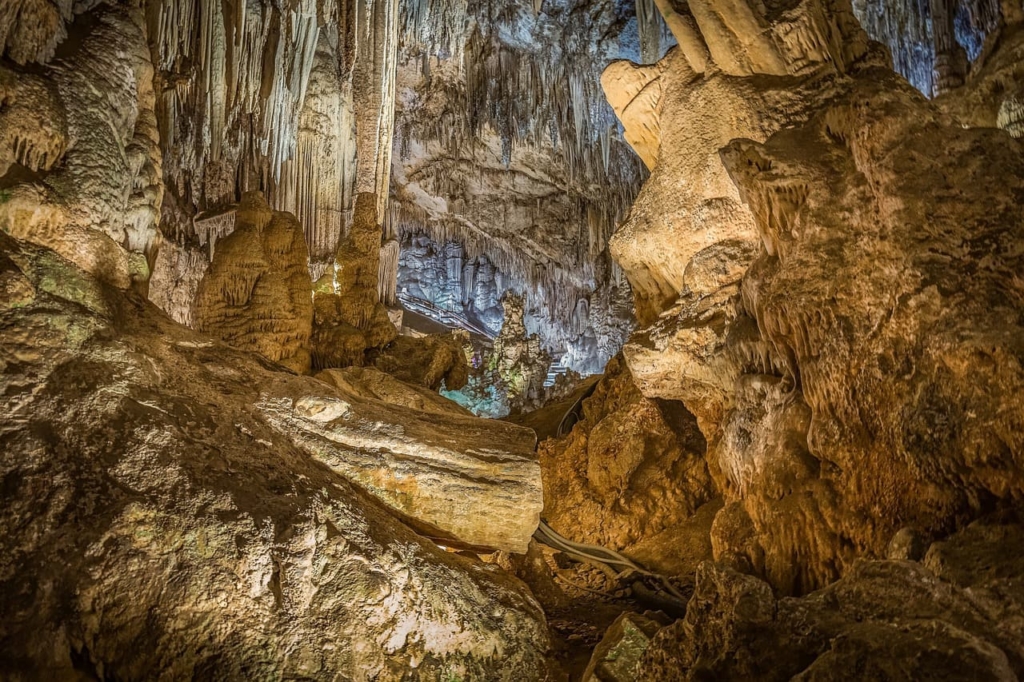 THE CAVE OF NERJA

The Cave in Nerja is the most famous cave on the Costa del Sol. It is the fourth most visited natural monument in Spain. Cueva de Nerja is a complex of two caves, 4 kilometres long and 35 kilometres wide. The most striking feature of these limestone caves is undoubtedly the longest and largest stalactite in the world, with a height of 33 meters and a base of 13 × 7 meters.

The cave was discovered on January 12, 1959. Paintings that represent seals that could be the first known work of art in the history of humanity were found. They are estimated to be 42,000 years old. 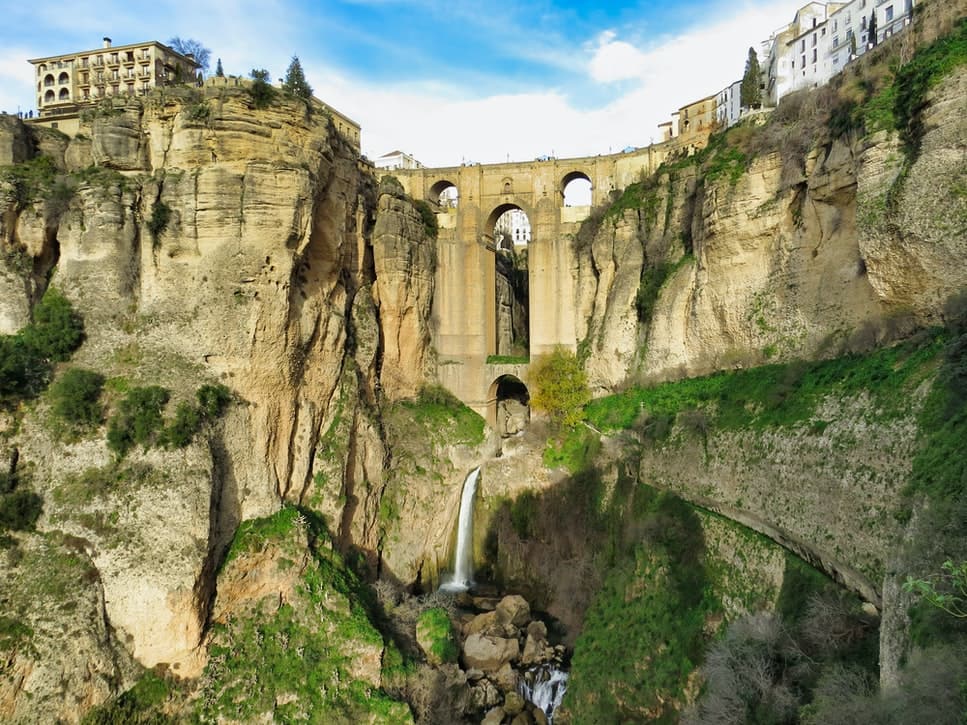 A VISIT TO RONDA

Ronda is one of the most visited places in Andalusia. This beautiful Andalusian town, in the mountains above the Costa del Sol in Southern Spain, is divided into two areas by the “Tajo de Ronda”. A 100 meter deep and 500 meters long gorge that divides the city. They are connected by the impressive and historical bridge ”Puente Nuevo” that was built in the eighteenth century. If you have seen pictures of Ronda you have for sure seen the pictures of the stunning old stone bridge.

The Arab baths in Ronda are the best preserved in Spain. They were built at the end of the 13th century. The baths are located in the old Arab quarter of the city, known as the San Miguel Quarter.

Another place you have to visit in Ronda is the famous bullfighting arena, Plaza de Toros. It is one of the oldest bullrings in Spain and home to modern bullfighting.

Ronda is very easy to visit, and you can walk almost everywhere. Wine tasting tours to Ronda are also very popular. Read more in our blog!

The distance from Quartiers Marbella Apartments to Ronda is only 52 kilometres, and you drive there in less than an hour.

Emelie Christiansen2020-08-13T15:39:29+02:00
Page load link
We use cookies to ensure that we give you the best experience on our website. If you continue to use this site we will assume that you are happy with it.Ok
Go to Top