Do you want to visit one of the most spectacular places in southern Spain? Until 2015 El Caminito del Rey was considered one of the most dangerous in the world. Today it is completely safe to visit, but still, It is an exciting challenge to walk along the 300-meter high mountain wall with scaring deep gorges under your feet.

In the heart of the province of Malaga, we find the Caminito del Rey, one of the most spectacular walking paths in the World. It stretches almost 8 kilometers along the deep Gaitanes gorge and it takes around 90 minutes to walk all the way.

Caminito del Rey or the King’s path is a series of walkways hanging over the void at 100 meters height. There are parts where the width of the gorge barely reaches 10 meters and others where the panoramic views are spectacular. Walking along the Caminito del Rey is one of the most incredible experiences that a traveler can live in Andalusia. The path, barely 1 meter wide and anchored to the walls of the gorge, was built in 1905 and its construction was due to the need to connect the Gaitanejo waterfalls and the Chorro fall for hydroelectric reasons.

When the construction was finished in 1921 King Alfonso XIII traveled to the area to inaugurate the spectacular path and walked between both points. Since then, locals began calling the place “Caminito del Rey”, a name that has continued to be used until today.

Its progressive inaccessibility and the lack of maintenance resulted in the place deteriorating to the point of becoming practically inaccessible to most visitors but at the same time more and more of an attraction for climbers who dared to walk the old path saving holes and huge falls along the way. Its danger made it one of the most famous areas in Europe to climb and experience strong emotions. Over the years the area became a legend with hundreds of climbers arriving in this area in search of an adventure that sometimes would end up in an accident, impossible rescues and even death. 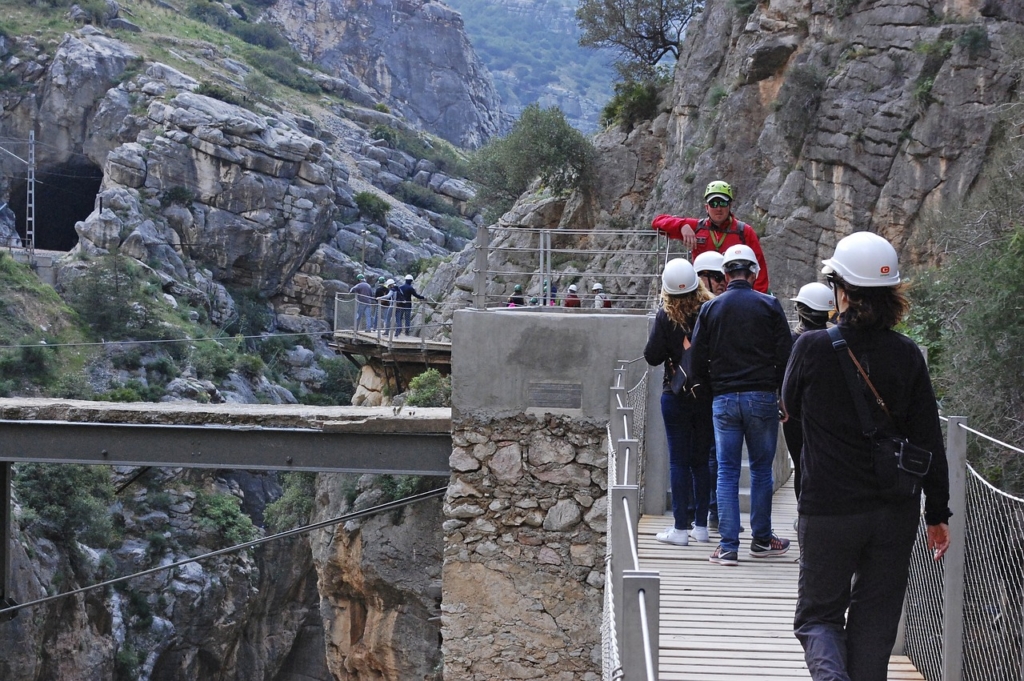 In February 2014, the path began to be restored and today everyone can enjoy one of the most spectacular areas of Andalusia without risks of any kind. The new path is built a few meters above the old one and it is quite scary to see it. At one point there is a transparent platform over the depth and you also have to cross a 30-meter long hanging bridge with more than a hundred meters between you and the ground, or in fact, the river Guadalhorce. One thing you need to know is that once you reach the part of the path that is hanging on the mountain wall there is no return, you can only walk the path in one direction from there, so if you start you will have to walk all the way.

Access is limited to 600 persons/day and to visit the Caminito del Rey you have to buy the tickets in advance, there are two options with different prices:

Children must be over 8 years old and show their original ID or Passport to check their age.

The Caminito can close for the following reasons:

In the case of closure, an SMS is sent to all visitors a day before or the same day and the tickets can be changed for a different date.