Take a day trip to Gibraltar

Gibraltar is a small peninsula linked by an isthmus to the Spanish city La Linea, in the bay of Algeciras. The most peculiar thing about Gibraltar is that it is British territory, joined by an airport to Andalusia. Its situation and its history make it a very interesting day trip when you stay at Quartiers Marbella Apartments.

The “rock” as the British colloquially call Gibraltar also logically belongs to the European Union, at least for now, but that can change if a no-deal Brexit takes place. In the Brexit referendum its population voted mostly in favour of staying in the European Union.

It is about an hour’s drive to Gibraltar from Quartiers Marbella Apartments. Once you arrive you can park the car in La Linea and walk cross the border. If you decide to drive across the border just keep in mind that it is quite difficult to park in the city, and the car is not of much use either. Sometimes you have to wait very long to cross the border back to Spain again by car.

It is only necessary to show a national identity card for European citizens, others will need their passport.

If you decide to enter by car, you have the option to leave it in a parking lot located in the square where the cable car is accessed.

You can also reach Gibraltar by plane, especially from British airports. Gibraltar has one of the most curious airports in the world. It is located on the isthmus that connects the Rock with La Linea, where pedestrians and vehicles cross to enter to Gibraltar, so both vehicle and pedestrian crossing are interrupted when there is a take-off or a landing.

If you cross the border by foot you can take the bus into the city centre, or take a 20 minutes walk.

One of the reasons to visit Gibraltar is that you can buy certain products much cheaper than in Spain, for example tobacco, alcoholic beverages and gold.

Main Street, of course, is the main shopping area where you will find all kind of shops. Remember, even though its English territory, cars circulate on the right, just like in Spain. 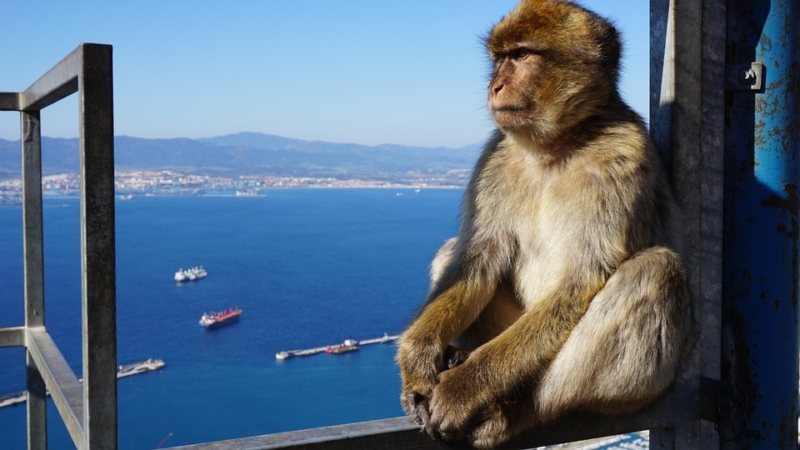 The cable car and the viewpoint

If you take the Cable Car to the top station you will get stunning views over the strait, Gibraltar, the Spanish coast and North Africa. The Top Station is located 412 m above sea level and here you get the chance to meet Gibraltar’s famous monkeys. But bee careful, they might look nice and funny, but they can be quite aggressive, they are wild animals and they also like to steal things like handbags, sunglasses and caps, so hold tight to your belongings. A superstition says that if the monkeys leave the Rock, the British will do the same, so they are cared for by the local government.

It takes 6 minutes to get to the top. The Cable Car base station is located by the Alameda Gardens, at the southern end of Main Street.

The labyrinth of tunnels known as The Great Siege Tunnels is perhaps the most impressive defence system devised by man and something one should not miss when visiting Gibraltar.

The first tunnels were built during the war of the Independence of the United States, when France and Spain tried to regain the Rock from the British. The Great Siege lasted from July 1779 to February 1783. Other tunnels and chambers were built during World War II.

This is a beautiful cave with spectacular stalactites, stalagmites and lakes. During World War II the cave was prepared to serve as an emergency hospital, but it was never used. Nowadays it is also used for concerts and shows.

The Tower of Homage is the only thing left of this fortification that was built during the 11Th century, throughout its history it defended Gibraltar from different sieges. The views from there are spectacular.

The lighthouse of Europe

Quartiers Marbella Apartment’s tip: British Pounds is the official currency in Gibraltar but it is possible to pay by euro as well, so you do not need to exchange money.